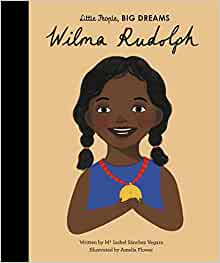 This massively popular children’s book series explores the lives of some of the most influential figures in history.

This incredible book series by Isabel Sanchez Vegara explores the lives of little people who had big dreams for the future and who grew up to be some of the most famous and influential people in our society. Little people Big Dreams is the original biography book series for your little ones to inspire them to chase their dreams and ambitions and learn more about these incredible people. Massively popular here at Treehouse the series has been growing over the past year and has recently branched out into famous male figures as well as games and fun activities. Each individual book is illustrated by a different illustrator to perfectly bring to life the childhood of these amazing figures and each book comes with a timeline at the back with pictures so your little one can learn even more.

Wilma was born into a family with 22 brothers and sisters, in the segregated South. She contracted polio in her early years and her doctors said she would never walk again. But Wilma persisted with treatment, and she recovered her strength by the age of 12. At school, Wilma showed a talent for basketball and sprinting, earning the nickname ‘Skeeter’ (mosquito) as she ran so fast. Wilma was in college when she went to the 1960 Olympics. She not only won gold in sprint events, but also broke world records with her sprinting skill. She had beaten polio to become an Olympic champion.